At the shared edge of Hollywood and Los Feliz, across from La Luz de Jesus Gallery / Wacko / Soap Plant, down a block from Cheetah's gentlemen's club, and next door to a tattoo place, lies the residence of artists Jay Erker and John Mills.  The front room of their place is also Weekend, described on their website as “a new artist-run space dedicated to showing the work of under-represented and emerging contemporary artists in Los Angeles and beyond.”  Since Erker and Mills opened Weekend in 2011, it has become one the defining outposts of Los Angeles' thriving community of artist-run and alternative spaces, with a string of acclaimed and engaging exhibitions, including of their own work.  The niche that Weekend and other alternative spaces fill in the contemporary art scene of LA is surmised in their words - “There is a tremendous amount of excellent work out there that falls through the cracks of the commercial art world and we like to think we provide a way for some of that work to be seen. We hope that in the end spaces like ours can provide a launching pad for artist's careers, helping them along the path to success.” - Jason Ramos, Los Angeles Contributor

Erker and Mills met during undergrad at the University of Florida in the 90's.  After earning MFAs from CalArts and CCAC respectively, the immediate landscape of the LA artist-run scene was well under their radar.  After returning in 2010, however, they found a thriving community of like-minded spaces, and Weekend was born.  With Mills being a painter, and Erker developing a body of 2D photo based work, exhibitions of artists engaging in painterly practices have found a place in Weekend's program.  A look at their past exhibitions finds solo exhibitions of painters Carlson Hatton, Tim Forcum, and Scott Greenwalt, as well as the all painting group show Hot Paint, featuring Heather Brown, Amy Feldman, Emily Noelle Lambert, Molly Larkey, Allison Miller, and Mary Addison Hackett.  On the state of painting in LA, Erker and Mills concede, “LA has not traditionally been known as a center for painting but that distinction seems to be changing, with more painters feeling comfortable working here.”  Weekend's hopes of exposing these artists to a wider audience has met with some success, with mentions and reviews from beyond the LA press.  Similar to other artist-run outfits, the audience for Weekend's shows is comprised mainly of other artists, and is reflective of their awareness as a part of a larger community: “Mostly, we work with artists that don't have representation... Mixing it up adds to the conversation and allows artists to expand their community.”  The artist-to-artist approach is evident in Weekend's exhibition history; in addition to having served as platforms for Erker and Mill's practice themselves, exhibiting artists have returned to guest curate shows on occasion. Odd Ghosts and Unlikely Dancers, a two-person exhibition featuring Phyllis Green and Bessie Kunath, was organized by artist Michelle Carla Handel, who was the featured artist in Weekend's second exhibition.

As practicing artists, the directors of Weekend maintain bodies of work that reflect modes of inquiry relevant to Los Angeles' history with pictures and picture-making.  Erker's last solo exhibition at Weekend find the processed, industrialized images of beauty and glamour turned psychologically inside-out; the hollow nothing of these superficial advertisements is now the blank canvas Erker de-faces.  Some are now mashed up with the material language of painting, picture-making's original descendent, as in Twin A and Twin B, where the application of white, impasto paint stick  to the image of a model's face suggests Georges Franju's French horror classic Eyes Without A Face.  Both the works and the film are meditations on feminine beauty, and the absurd contradictions therein.  John Mill's abstract paintings offer a series of contradictory formal descriptors: disciplined, yet loose; austere, but colorful; chaotic but bound.  Self-sustaining worlds of marks, strokes, scribbles, smears, and dabs maintain delicate, formal ecosystems that have a meandering relationship to their square edges.  Declarative animated compositions lie upon naked white canvases, shades of early Kandinsky by way of Gorky, and reminiscent of some of Josh Smith and Lesley Vance's kung-fu.

Installation view of Jay Erker: This Is So Much Better, image courtesy of Weekend, Los Angeles, CA.

Weekend's current exhibition features the flowing, abstract cyanotypes of Los Angeles based artist John Pearson.  The formal wordplay of describing the works as landscapes provides a change in perspective that makes the viewer the figure in the ground of the installed pieces.  In Pearson's work the syntax of painting's precocious younger sibling photography makes for more playfulness of pictorial language.  Created by exposing to sunlight and dodging with rocks, we are left with an image of a landscape attempting to describe itself with less reliance on the artists hand – a landscape in it's own words, as it were.  Pearson is also part of artist group and former Chinatown space WPA, another curatorial initiative put into motion by artists in LA.  The shared network here in LA between these outfits create the connecting threads between many of the artists involved. 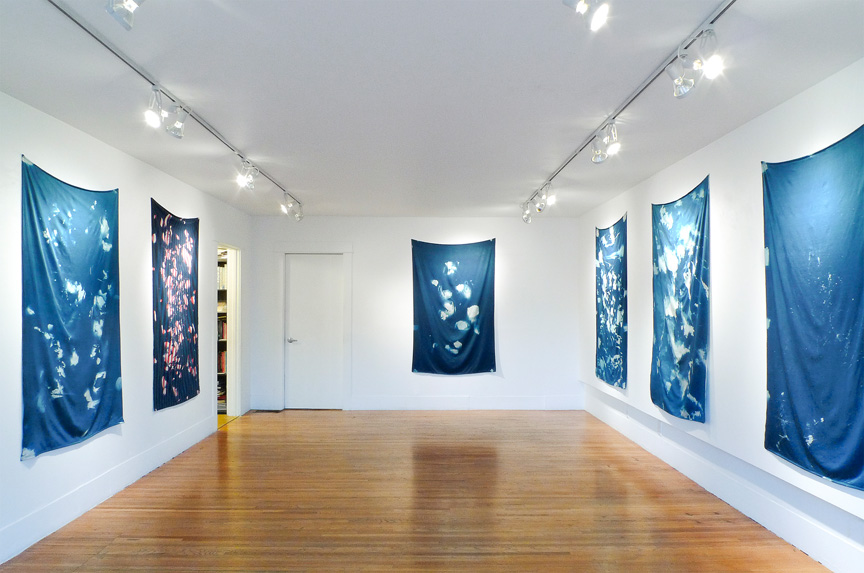 The grass-roots curatorial endeavors in Los Angeles of artists like Jay Erker and John Mills provide avenues for projects and works that are selected from the eye and sensibilities of artists themselves.  Weekend's model has found fertile ground in Los Angeles, where multi-use spaces are utilized by social media savvy artists to pro-actively engage in the contemporary art dialog without regard to commercial viability or institutional legitimacy.  Whether it be an artist's apartment, studio, garage, pop-up storefront, or industrial space, at Weekend and across the LA metroplex, engaging contemporary painting is always a Facebook invite away.

Jay Erker is an MFA graduate of California Institute of the Arts. She has been included in various group exhibitions in Los Angeles, NY and San Francisco and is currently a director at Weekend.

John Mills is an MFA graduate of California College of Arts and Crafts.  He has been included in solo and group exhibitions in Los Angeles and beyond, and is currently a director at Weekend.

John Pearson Pearson received an MFA from California Institute of the Arts and BFA from the School of the Art Institute of Chicago. He has exhibited widely in the United States including garages, non-profits, artist collectives, museums, and commercial galleries in Los Angeles along with solo exhibitions in New York; Saint Petersburg, Russia; and a recent two-person exhibit with Emily Newman at the Pittsburgh Cultural Trust, Pittsburgh, Pennsylvania.

Jason Ramos is an artist, curator, and writer based in Los Angeles.  He earned an MFA  in painting from Cal State Fullerton in 2007.  He is the director of RAID Projects and current assistant curator of the Torrance Art Museum.  His art work has been included in numerous exhibitions in Los Angeles and beyond.